Test Page For Add To Cart

“So, you’re still Master of your Domain?” “Yes, yes I am. Master of my domain. But I will tell you this: I’m going over to her apartment and I’m tellin’ her to put those shades down!”

Puberty in girls is saying, you are now ready to have sex and bear children.” I’ll call this girl in our discussion Jane. In the old days, like the last 2 million years, Jane would quickly be married off and become pregnant.

That isn’t a problem really.

But this isn’t natural, what I’m discussing with you now.

It’s the modern technology world, not the natural world we are genetically programmed to live in.

When Phil finally did have a partner, Jane, sex wasn’t that great.

In fact, his penis didn’t get that hard.

And he had been used to a huge variety of extreme sexual acts. Jane wasn’t into those.

Just sticking it into Jane was almost a letdown at this point.

And Phil had a tough time even having partner sex.

When Phil watches TV or a movie, it’s nothing but sex sex sex here, there and everywhere.

Each time Phil watches TV or a movie, or goes on the web, his brain gets further doses of sex without it being actual partner sex. So it isn’t Phil’s fault.

Phil has to regain his natural sensitivity. His brain has to rewire to real partner sex. As a result, Phil requires a LOT of sexual stimulation when he’s with a partner.

How to tell you are desensitized to partner sex

She CAN do those things of course but if Phil had his natural sensitivity he would already be ultra hard with even the realistic possibility of partner sex.

A man who requires a lot of penis stimulation to get hard is very desensitized.

Once Phil recovers from desensitization, he gets semi erections when Jane kisses him. He gets ultra hard sometimes even when he watches Jane undress.

And when they lie together, it isn’t long before Phil gets literally turned on — it’s like a lightswitch going on and he is ready for sex. Phil gets hard naturally without Jane touching his penis.

And he stays hard for 30 minutes or an hour. Not ultra hard, but hard enough. His penis naturally cycles from very hard to semi hard back to very hard, throughout a 30 minute or hour sexual session with Jane.

He never goes soft while having sex.

Phil fixed his desensitization and you can fix yours

What Phil did was simple solo activities that fixed things.

But it didn’t happen overnight.

Phil has now discovered something amazing.

He was spilling his seed all the time in the old days and he isn’t doing that anymore.

When he comes, it’s inside of Jane. Phil has discovered his newfound sexual prowess and ability spills over into attraction.

Jane is more into him than ever.

And random girls look two or three times at Phil, often signaling their sexual interest in him with not-to-subtle signs.

And Phil is more motivated in his career.

His colleagues and co-workers (both men and women) look at him with more respect now.

Phil even finds his workouts at the gym are a lot better than they have been in a long time. These are some of the many benefits from getting your desensitization fixed.

Click for the next page to get started yourself!

The three under reported causes of anxiety depression you probably haven’t heard enough about:

1. Being alone too much

2. Being connected online too much

3. Trying to fight the depression and anxiety with self-talk

Being alone too much

This one is huge. When you are alone too much, you lose the most important thing to a human being. You lose the sense of connection.

Connection builds up Oxytocin. There is no way to be happy without high Oxytocin.

When you increase your Oxytocin, you feel happier. Anxiety leaks out like air from a balloon. And you have a sense of fulfillment in your life rather than a sense of not having enough.

Being connected online too much

This is a huge problem. Studies show that the more time you spend on Facebook, texting, Instagram, and so forth, the more anxiety you develop.

There is a strong link between spending time online and anxiety and depression.

The reasons are several.

First of all, let’s say you spend time on Facebook. Almost all the posts your “friends” make are like this one: 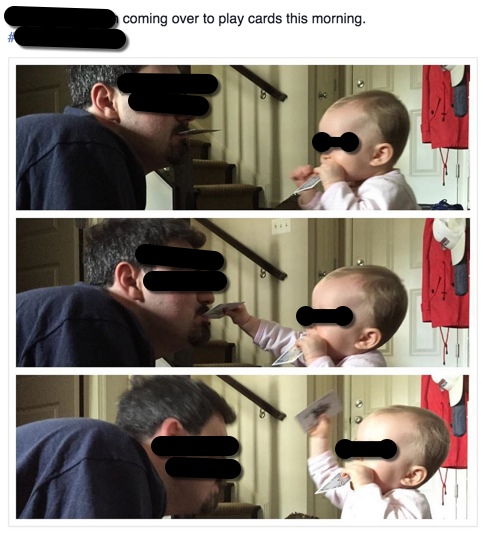 Cute, right?? But you don’t hear the arguments, the bickering, the bad stuff that are normally a part of every life. Facebook is all about people telling the world about their accomplishments so they feel better about themselves. I have nothing against Facebook but spending time on it makes most folks feel shitty about their own lives.

It’s life’s highlight reel, when you and I are seeing what goes on behind-the-scenes in OUR lives. We compare what we know about our lives, to the highlight reel on other people’s lives, and we feel like crap.

Also, the time spent online increases dopamine. It’s a click-click-click see-what’s-next activity that wires our brain to novelty instead of to fulfillment.

That click-click-click is VERY depressing and causes a lot of anxiety.

This is really what gets us down.

“I shouldn’t feel this way.”

“Why am I always feeling shitty?”

The more we fight the anxiety or depression, the worse we get.

Resist and it persists.

What fixes this, is getting over any kind of ED issues, and that means connecting with a woman. Connection even without sex builds up Oxytocin.

Oxytocin is THE most powerful way to feel relaxed and happy and fulfilled. Then erections will follow.

Next: Fix ED issues and get your life back, and feel happy and fulfilled